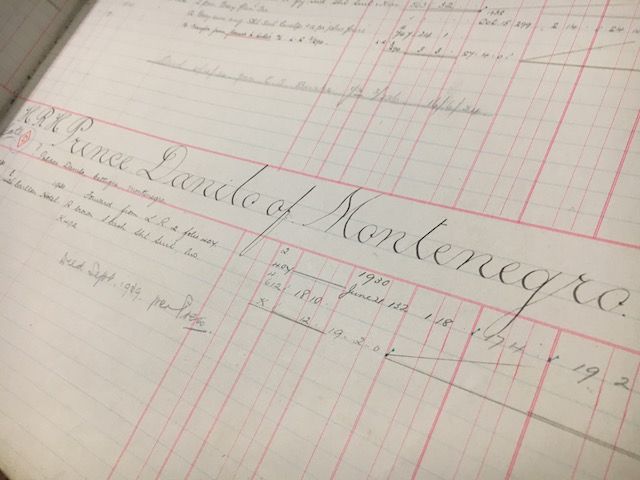 HRH Prince Danilo of Montenegro (1871-1939) has the dubious honour of being proclaimed King Danilo II for six days in 1921 when he repeatedly accepted then abdicated the Balkan throne in exile. He was the eldest son and heir of Montenegro’s first king, Nikola I, and his consort Queen Milena who had reigned constitutionally since 1910 but ruled absolutely as prince since 1860 when Montenegro was a principality rather than a kingdom.

At the time of Prince Danilo’s birth, Montenegro’s population was no more than a quarter of a million people and its capital city, Cettinje, a village containing 3000 souls. A political minnow, Montenegro’s influence on the European stage was magnified thanks to Queen Milena’s matchmaking skills for her nine daughters. When a foreign diplomat commented to the King that Montenegro had no exports, Nikola replied ‘you forget my daughters’ who he’d send to larger, more sophisticated European courts to be finished.

By the time he was of marriageable age, Prince Danilo’s sisters Militza and Stana were married to Russian Grand Dukes, Princess Ljubica was wed to the future King Peter of Yugoslavia and Princess Elena was Queen of Italy. The Prince established his own household at the Blue Palace, built for him in 1894-5 in Cettinje. Not uncommon for an heir to a long-established, popular king he dedicated his life to the pleasures of hunting, shooting and tending his ‘pride and joy’ collection of rare plants in the conservatory of the Blue Palace.

Like a romantic hero in a Gilbert and Sullivan operetta, Prince Danilo looked dashing in uniform but showed little sign of action. His father called him ‘a big lazy bones who would come to nothing’ so, in 1898, King Nikola sent his heir to the Romanov court where his sisters were instructed to look for a bride. Militza and Stana had a sinister reputation in St Petersburg as disciples of the occult and were known as ‘the Black Duchesses’. It was they who introduced the monk Grigory Rasputin to the Tsar and Tsarina taking Russia one step closer to Revolution.

It was in St Petersburg that Prince Danilo met the German Duchess Jutta of Mecklenburg-Strelitz who agreed to convert to Greek Orthodoxy in order to marry the Montenegrin heir. She – and her dowry – were an advantageous match. In 1899 the New York Times reported ‘the approaching marriage of Crown Prince Danilo of Montenegro and Princess Jutta of Mecklenburg-Strelitz will be celebrated with splendour unprecedented in the land of the Black Mountains’.

King Nikola took offence that the Mecklenburg-Strelitz dowry did not go directly to him so, before the wedding, announced that the Prince was gravely ill. In retaliation, the Duchy of Mecklenburg-Strelitz released a bulletin to say that Duchess Jutta’s health had also failed. Tsar Nicholas II of Russia intervened and gave Duchess Jutta a dowry of two million roubles forcing King Nikola to publish a face-saving announcement that Prince Danilo had recovered from a successful if critical operation.

Princess Militza, as Jutta became titled, was an extraordinary woman: a brilliant pianist, a superb needlewoman, a deft caricaturist and (improbably) an expert in jiu-jitsu. But apart from the occasional appearance on the European royal stage – guests of honour at the 1904 coronation of King Peter I of Serbia or representing Montenegro at the coronation of King George V in 1911 – life was dull for the Crown Princess.

King Nicholas and Prince Danilo both fought in the Balkan Wars of 1912 and Montenegro was the first neighbouring country to go to Serbia’s aid against the invading Austro-Hungarian forces at the outbreak of World War One in 1914. Prince Danilo and Princess Miliza narrowly escaped assassination attempts when Austrian pilots attempted to bomb their villa in Antivari and targeted a warship they were disembarking from.

After the Allied victory in 1918, Montenegro initially welcomed an influx of Serb troops until it became clear that Montenegro was in danger of being annexed by its neighbour. The Montenegrin royal family fled to Italy then France and their territories were incorporated into the new Kingdom of the Serbs, Croats and Slovenes (later renamed Yugoslavia in 1929). King Nikola refused to acknowledge the loss of his country and died in Antibes in 1921.

In a Ruritanian episode worthy of the fictional Prisoner of Zenda, Prince Danilo became King Danilo II of Montenegro in 1921 and spent the next five days making contradictory announcements before finally passing the throne to his cousin Prince Michael. Prince Danilo found his way to the French Riviera and lived-out the rest of his days in Nice. We know Prince Danilo came to London in 1930 where Henry Poole & Co still accorded him his HRH in the ledgers when he ordered a brown cashmere short suit while he was staying at the now-demolished Carlton Hotel on Haymarket.

Prince Danilo briefly appeared in the newspaper headlines again in 1934 when he sued Hollywood studio MGM for libel for a false depiction of himself in the 1925 silent film The Merry Widow. ‘I am unspeakably pained to see myself travestied by a cheap cinema star’, Prince Danilo told the court. ‘The film constitutes a serious libel on myself, my family and on my late, lamented country Montenegro’. Director Erich von Stroheim’s response was ‘we can only reply that these charges are so silly and asinine that the only real answer to these charges should be a laugh and a wink’. Prince Danilo won and was awarded $4000. He died in Vienna in 1939 after the German Anschluss.