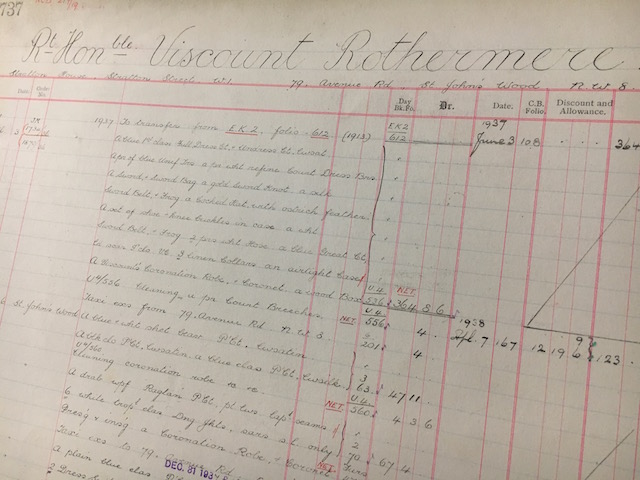 As co-founders of the Daily Mail and Daily Mirror press barons Harold Harmsworth, 1st Viscount Rothermere (1868-1940), and his brother Alfred, Lord Northcliffe were pioneers in popular tabloid newspapers. When Lord Northcliffe died without an heir in 1922, Lord Rothermere became sole proprietor of Associated Newspapers and the third richest man in Britain. The last decade of his life was clouded by Lord Rothermere’s support for Hitler’s Germany and his relationship with Austrian ‘Nazi Princess’ Stephanie von Hohenlohe also known as ‘the vamp of European politics’.

A grammar school boy and clerk for the Board of Trade, Harmsworth took employment at his brother Alfred’s newspaper company in 1888. Alfred’s instinct for journalism and his brother’s for business bore fruit in 1896 when they published the Daily Mail that was modelled on the American press and sold as ‘the busy man’s daily news’. Simple, short and readable, the Daily Mail was the first newspaper to pioneer banner headlines on the front page, human interest and sport coverage and the first women’s section in a British newspaper. By 1899 the circulation was over a million.

The Daily Mirror was launched in 1904 as a ‘women’s newspaper’ with a female editor, Mary Howarth, but little success. As Lord Rothermere ruefully said, ‘some people say that a woman never really knows what she wants. It is certain she knew what she didn’t want. She didn’t want the Daily Mirror’. Hiring editor Hamilton Fyfe, Lord Rothermere turned the Mirror into a pictorial and within a month the circulation rose sevenfold. The Mirror thrived on pictorials about the Royal Family and orchestrated stunts such as offering 100 Guineas for the first person to swim the English Channel. Lord Northcliffe sold his stake in the Mirror to his brother in 1914.

With the Daily Mirror the most popular newspaper on the Western Front during World War One, Lord Rothermere’s support was vital for Prime Minister Lloyd George who appointed him President of the Air Council. He tragically lost two of his three sons within a week in the Great War which might well have influenced his actions in the years leading up to World War Two. In 1919 Lord Rothermere was created a Viscount; his titles rising with the circulations of his newspapers. Between them, Lord Rothermere and the Daily Express proprietor Lord Beaverbrook could bring down a government. In 1922 Lord Rothermere paid £1.6 million for the controlling interest in Associated Newspapers after his brother’s death. By 1926, the Daily Mirror had two million readers and the Daily Mirror over three.

Lord Rothermere joined the fashionable world spending three months of the year gambling in Monte Carlo where he met the exotic Princess Stephanie von Hohenlohe in 1927. A political adventuress, it was she who brought Lord Rothermere’s attention to restoring lands to Hungary that were ceded by the Treaty of Versailles. His thundering editorials in the Daily Mail called for a return of the Hungarian monarchy. According to Jim Wilson, author of Nazi Princess: Hitler, Lord Rothermere and Princess Stephanie von Hohenlohe (2011) ‘a group of monarchists even offered the throne to Rothermere himself. Briefly, he took that offer seriously but he quickly realised it was totally unrealistic’.

Henry Poole & Co dressed Lord Rothermere for the coronation of King George VI in 1937. He ordered a coronation robe, viscount’s coronet and dress sword with gold sword knot costing £364 (£21,000 in today’s currency) as well Court Dress with knee breeches, two dress suits (white tie) and two dining jackets (black tie) with two pairs of trousers for each coat. The delivery address given was his Art Deco office building Stratton House opposite the Ritz hotel on Piccadilly.

In his 1939 book My Fight to Rearm Britain, Lord Rothermere wrote that he chose Fascism as a defence against the spectre of Bolshevism. As early as 1933 he wrote that ‘the minor misdeeds of individual Nazis will be submerged by the immense benefits that the new regime is already bestowing on Germany’. In 1934 he wrote a piece for the Daily Mail headlined ‘Hurrah for the Blackshirts’ in reference to Oswald Mosley’s British Union of Fascists though it has to be said Lord Rothermere withdrew that support within a year. He visited Nazi Germany for the first time in 1934 and hosted a dinner at the Adlon hotel in Berlin attended by Hitler, Goebbels, Goering and the Princess von Hohenlohe.

The Princess von Hohenlohe was the conduit between Hitler and Lord Rothermere. In London she kept an apartment in the Dorchester hotel and Hitler had granted her a schloss outside Salzburg confiscated from its Jewish owner. British, French and American secret services all suspected the princess of being a German agent and she was named in the newspapers as ‘London’s leading Nazi hostess’. The MI5 files called her ‘an extremely dangerous person’. It emerged that Lord Rothermere was paying the Princess von Hohenlohe an annual retainer of £5000 and that he sent personal messages to Hitler congratulating him on the annexation of Czechoslovakia while encouraging Germany to set its sights on Romania.

In 1939 the Nazi high command discovered that the Princess von Hohenlohe had Jewish blood in her family. Lord Rothermere stopped his retainer and the princess chose to go to court retaining the same solicitor who handled Wallis Simpson’s divorce case in 1936. She lost and Lord Rothermere covered her legal costs on the condition that the Princess von Hohenlohe left the country on a ‘No Return’ permit. Lord Rothermere, who had stood down as chairman of Associated Newspapers in favour of his son Esmond, retreated to Bermuda where he died on the 26th of November 1940.