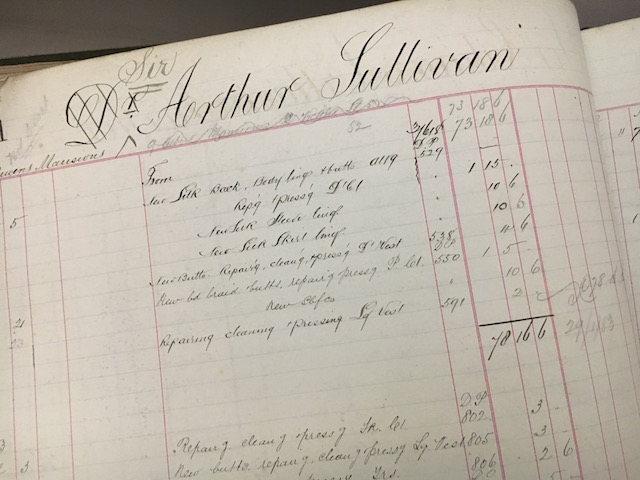 Sir Arthur Sullivan (1842-1900) is one of the most prolific composers of the Victorian age whose work is perhaps unfairly best remembered for his comic operettas with librettist W. S. Gilbert. Between 1775 and 1789 Gilbert and Sullivan’s satirical operettas commissioned by Richard D’Oyly Carte and produced in his purpose built Savoy theatre were the talk of London and are still produced worldwide today.

The son of a military bandmaster, by the age of eight Arthur Sullivan could play every instrument in a military band. The child protégé was accepted as a choirboy of the Chapel Royal and rose to become a noted soloist. Aged fourteen, he was the first winner of the Mendelssohn Scholarship and studied at the Royal Academy of Music then the Leipzig Conservatory. Sullivan composed incidental music for Shakespeare’s The Tempest as a valedictory project at Leipzig. It was performed at the Crystal Palace in 1861 in front of Queen Victoria, her consort Prince Albert and an admiring Charles Dickens making the young man’s name.

Celebrity did not bring remuneration and Sullivan initially supported himself teaching and playing the organ at St Michael’s Chester Square and the Royal Opera House. His ballet L’Ile Enchantée was performed there in 1864. He wrote his first comic opera, Box & Cox, in 1866 which was warmly received but Sullivan seemed torn between the music of the conservatoire and the music hall. In 1871 he and Gilbert first worked together on a Christmas pantomime at the Gaiety theatre called Thespis. A year later, Sullivan wrote a Te Deum performed at St Paul’s Cathedral to celebrate the recovery of heir to the throne, the Prince of Wales, from a near-fatal bout of typhoid.

In 1875 Richard D’Oyly Carte needed a one-act filler to put on the bill with Jacques Offenbach’s Perichole. He brought Gilbert and Sullivan back together who penned Trial by Jury with Sullivan’s brother Fred cast in the role of the judge. Perichole sank without trace but Trial by Jury ran for 300 performances and prompted D’Oyly Carte to build his new theatre to house the string of pearls that the composer and librettist produced in the next fifteen years: HMS Pinafore (1878), The Pirates of Penzance (1879), Iolanthe (1882), The Mikado (1885), Yeoman of the Guard (1888) and The Gondoliers (1889).

In 1883 Sullivan was knighted at the command of Queen Victoria who was amused by his operettas. The sometimes fractious relationship between Gilbert, Sullivan and D’Oyly Cartle has been well documented not least in the 1999 Mike Leigh film Topsy Turvey about the painful birth of The Mikado. The final conflict came about in 1890 over something as trivial as the carpets for the Savoy theatre that D’Oyly Carte and Sullivan agreed should be paid for by the triumvirate while Gilbert did not. As he rightly asserted, both composer and librettist had become wealthy men thanks to the Savoy operettas but D’Oyly Carte had become wealthier … so much so that he built the Savoy hotel in 1889.

Matters came to a head when Gilbert sued his partners while their production of The Gondoliers was a sell-out. Sullivan would write to Gilbert and lament that he was ‘physically and mentally ill over this wretched business (and) have not yet got over the shock of seeing our names coupled in hostile antagonism over a few miserable pounds’. And thus one of the most successful musical partnerships that Britain has ever produced ended with a whimper rather than a bang.

Arthur Sullivan was not a well man. He suffered with kidney trouble and had had to sit down to conduct since the early 1880s. Neither had he married preferring mistresses such as the American socialite Fanny Ronalds. Ronalds and Sullivan had met in Pairs in 1867, she moved to London in 1871 and would still be at his side when he died. Sullivan had also all but adopted his late brother Fred’s son Bertie who lived with him. Without Gilbert, Sullivan wrote the opera Ivanhoe to open D’Oyly Carte’s Royal English Opera House (now the Palace) but it was not a success.

In 1893 there was a rapprochement between Gilbert and Sullivan who co-wrote Utopia Limited for the Savoy theatre but the duo argued again over Sullivan’s dislike of leading lady Nancy McIntosh. He returned to ‘serious’ compositions writing the ballet Victoria and Merrie England in 1897 to celebrate Queen Victoria’s Diamond Jubilee. The piece did not garner the universal praise that his 1886 choral work The Golden Legend, for the Leeds Festival, enjoyed. It was second only to Handel’s Messiah as the most performed choral work of the decade.

Sullivan’s reputation took a dip after his death with serious musicians seemingly agreeing with The Musical Review who said of him in 1883 ‘Some things that Mr Arthur Sullivan may do, Sir Arthur ought not to do. In other words, it will look rather more than odd to see announced in the papers that a new comic opera is in preparation’. Few people today remember Sullivan as the composer of Onward Christian Soldiers but his Mikado still sells-out theatres and makes audiences laugh over 130-years since it was written.