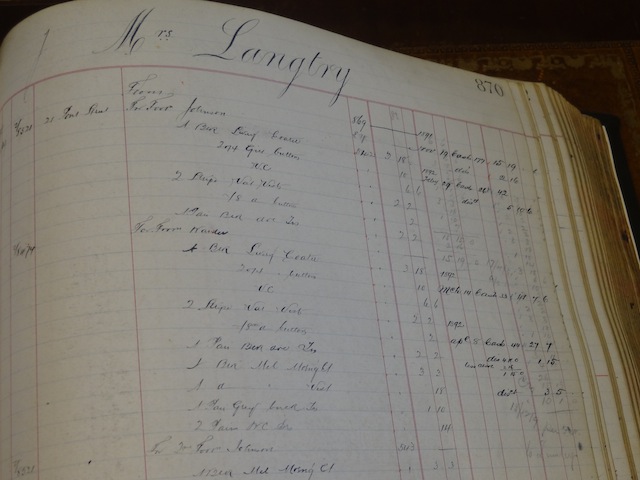 Royal mistress and actress Lille Langtry, christened the Jersey Lily by Pre-Raphaelite artist John Everett Millais, was one of the most celebrated beauties and successful social climbers of her age. Born Emilie Charlotte Le Breton, she was the daughter of the Dean of Jersey. A precocious child in a household full of men, she rejected a governess and was educated with her brothers by a series of tutors. This would stand her in good stead. As George Bernard Shaw said of her in her prime, ‘I resent Mrs Langtry, she has no right to be intelligent, daring and independent as well as lovely’.

Lillie secured her first husband landowner Edward Langtry in 1872. She seemed more taken with his yacht the Red Gauntlet than the man himself and was rather exasperated not to settle in London. After a near-fatal bout of typhoid, she persuaded Langtry that London would be good for her health (?!) and they took a townhouse in Eaton Place in 1874. Under the patronage of Lord Ranleigh and painter Frank Miles, Mrs Langtry was introduced to London Society and bewitched rakes such as Lord Randolph Churchill. Copies of her portraits by Miles, Millais and Burne-Jones were sold as postcards to a public enchanted by her charms.

On the 24th of May 1877, a private dinner was arranged to introduce the famous Mrs Langtry of the violet eyes and sharp wit to the sybaritic Prince of Wales (the future Edward VII). Christopher Hibbert’s definitive biography of Edward VII (1976) says the Prince was ‘immediately captivated by this tall, graceful, glowingly voluptuous woman who had recently established herself as one of the most sought after beauties in London. Led by the Prince’s long-suffering wife Alexandra, Society accepted the presence of Mrs Langtry at any occasion attended by the Prince of Wales’.

Ditties were penned for Mrs Langtry including one with the amusing couplet ‘London Society has gone quite silly, Fallen at the feet of the Jersey Lillie’. Oscar Wilde said of her ‘I would rather have discovered Lille Langry than America’ and Queen Victoria received the royal mistress who mischievously wore the Prince of Wales’s three ostrich feathers in her hair. In 1877 the Prince built a love nest called the Red House for the Jersey Lille outside Bournemouth. A window with their initials and entwined hearts etched by Mrs Langtry still exists I the building; now a hotel.

The affair died in 1880 when Mrs Langtry allegedly put ice down her prince’s collar at a private dinner. Removal of his patronage could have proved fatal for Lillie Langtry. Her husband’s alcoholism had resulted in a dwindling of their fortunes. Not to be defeated, Mrs Langtry made her stage debut a year later at the prompting of Sarah Bernhardt, in a production of She Stoops to Conquer.

Largely thanks to the Prince attending her performance numerous times, Mrs Langtry was a success despite possessing limited talents as an actress. Cast adrift but not abandoned by the Prince of Wales, Mrs Langtry embarked on an affair with the Earl of Shrewsbury and Prince Louis of Battenberg (father of Lord Louis Mountbatten) who was allegedly the father of an illegitimate daughter born in Paris. Mrs Langtry conquered American touring with her own theatre company and found several wealthy patrons on the road.

Mrs Langtry’s relationship with Henry Poole & Co began in 1885 when she was having an affair with American millionaire and thoroughbred trainer Frank Gebhart who was also a customer. It was Gebhart who furnished Mrs Langtry with a stud in Newmarket and bought her beloved horse Merman who won the Ascot Gold Cup. Mrs Langtry’s stable raced under the assumed name Mr Jersey because the Jockey Club forbade women from joining. Her first ledger page in the Poole livery books records Mrs Langtry living at 21 Pont Street in Mayfair and the clerks note that her account was to be transferred to Mr Gebhart’s for payment.

Mrs Langtry’s only personal order at Poole was a black cloth riding habit. Her remaining orders are recorded over twenty pages. They are for lavish liveries to dress her households and stables. In 1890, the ledger clerk records no orders to be executed without her written authority. This tallies with Mrs Langtry’s separation from her American benefactor. In 1899 Mrs Langtry married Lord Gerald de Bathe, 19-years her junior, on the same day Merman won the Goodwood Cup. As Lady de Bathe, she perpetuated her fame by endorsing products such as Pears soap and selling wine from her Californian estate emblazoned with her image. Mrs Langtry’s last years were spent in Monte Carlo where she died in 1929. It is believed that Mrs Langtry was Arthur Conan-Doyle’s inspiration for the adventuress Irene Adler in his 1891 Sherlock Holmes mystery A Scandal in Bohemia. 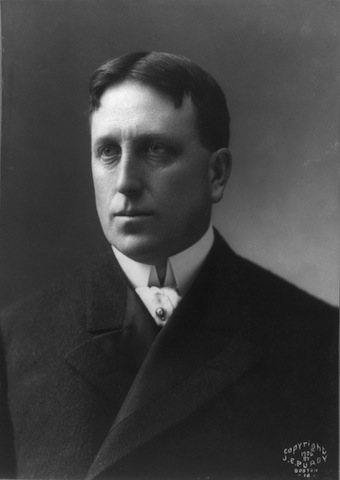