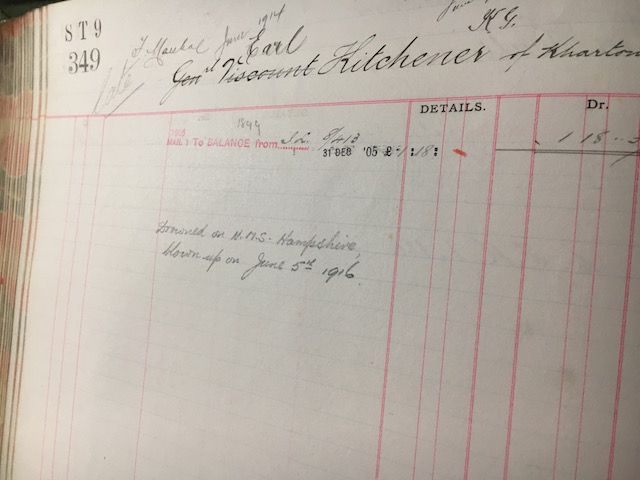 Field Marshal Horatio Kitchener, 1st Earl Kitchener (1850-1916) is best remembered for the World War I recruitment poster featuring him pointing with the slogan ‘Britons! Your Country Needs You’. His death, when Kitchener perished with 650 hands aboard HMS Hampshire in 1916, is still the cause of conspiracy theories and controversy rages about Lady Asquith’s unkind epitaph ‘If not a great man, he was at least a great poster’.

Born in County Kerry, Ireland, Kitchener began his military career at the Royal Military Academy in Woolwich before volunteering to drive an ambulance during the Franco-Prussian War (1870-71). When Kitchener took-up his commission in the Royal Engineers in 1871, his Colonel-in-Chief HRH The Duke of Cambridge (King George III’s grandson) reprimanded Kitchener for serving with the perfidious French but he remained a passionate Francophile his entire life.

In addition to French, Kitchener learned to speak fluent Arabic on a posting to Palestine where he mapped the country between 1874 and 1877. He and colleague Claude Conder produced an eight volume Survey of Western Palestine that was used to map the modern border between Israel and the Lebanon in Upper Galilee. In the 1880s Kitchener was posted to Cairo where he took command of the Egyptian Cavalry Regiment. He was part of the tardy operation sent to rescue General Gordon whose troops were being besieged by the Mhadi (the Sudanese Islamic religious leader) in Khartoum in 1884. Gordon’s beheading and the slaughter of British soldiers sent shockwaves throughout the British Empire.

With his sun-bleached moustache, the 6’2 Kitchener was the model of a colonial war hero. A War Office report in 1890 read ‘(he is) a good brigadier, very ambitious, not popular but has of late greatly improved in tact and manner … a fine, gallant soldier and good linguist and very successful in dealing with Orientals’. Kitchener admitted to being ‘a solitary bird’ and happier alone. He never married.

In 1896 Prime Minister Lord Salisbury sent Kitchener into the Sudan to fight the Dervishes in the Battles of Ferkeh and Hafir. His victories earned Kitchener a promotion to Major General though he was still a divisive figure. A fellow officer wrote, ‘he was always inclined to bully his own entourage, as some men are rude to their wives. Often morose and silent for hours together … he was even morbidly afraid of showing any feeling or enthusiasm, and he preferred to be misunderstood rather than being suspected of human feeling’. In 1898 Kitchener marched his troops to the walls of Khartoum to avenge Gordon’s death. A young Winston Churchill fought under Kitchener in the Battle of Omdurman writing prolifically and critically about Kitchener’s tactics.

The Dervishes were routed in the Siege of Khartoum. In Kitchener’s words, ‘Well, we have given them a damn good dusting’. The Daily Mail celebrated Kitchener’s victory saying ‘he is more like a machine than a man. You feel that he ought to be patented and shown with pride at the Paris International Exhibition’. As Governor General of the Sudan, Kitchener practised religious tolerance. He rebuilt the mosque in Khartoum and discouraged Christian missionaries from trying to convert the indigenous Muslims.

In 1899 Kitchener was dispatched to South Africa to serve as Chief of Staff during the Anglo-Boer War. His record in South Africa was called into question when he was said to support the concentration camps in which 26,000 women and children died. With the war over in 1902 General Kitchener returned to the UK where he was met in London by the Prince of Wales (the future King George V) and awarded the Order of Merit by King Edward VII. The King created him Viscount Kitchener of Khartoum and the Vaal.

Viscount Kitchener was appointed Commander-in-Chief of the Indian Army in 1902 and presided over the 1905 Royal Tour of India conducted by the future King George V and Queen Mary. Promoted to Field Marshal in 1909, Kitchener toured of Australia and New Zealand. In 1911 Kitchener returned to Egypt as Consul General and was made Earl Kitchener of Khartoum in 1914.

When World War I was declared, Kitchener correctly predicted that it would ‘plumb the depths of manpower to the last million’, it would last for years and the casualties would be catastrophic. Prime Minister Asquith made Kitchener Minister for War but the Earl’s decision-making was criticised as insufficiently knowledgeable about modern warfare. As the Daily Mail wrote in 1915 ‘Lord Kitchener had starved the army in France of high explosive shells … He persisted in sending shrapnel: a useless weapon in trench warfare’.

On Friday 5th of June 1916 Kitchener boarded HMS Hampshire to sail to Russia on a diplomatic mission. En route the ship struck a mine planted by a German U-Boat and it sank west of the Orkney Islands. His body was never recovered. The Manchester Guardian said brusquely ‘as for the old man, he could not have done better than to have gone down, as he was a great impediment lately’. King George V was more respectful saying ‘It is indeed a heavy blow to me and a great loss to the nation and the allies’. The All Souls chapel in the North Tower at St Paul’s Cathedral was dedicated to Kitchener’s memory in 1925 and in 1926 a bronze statue of the Earl was unveiled on the south side of Horse Guards Parade.